The 2013 scandal at the Morton Hall crematorium in Edinburgh, where at least 250 dead babies’ remains were buried in secret rather than returned to their families over more than four decades, led to a Scottish Government investigation into the cremation of infants. One of the outcomes of the government report was a recommendation that all professions involved in child deaths, from medical staff and funeral directors to clergy and counsellors, have specific and appropriate training.

Although this applies only to Scotland, the Independent Funeral Directors College has taken a lead and developed a new course for all independent funeral directors called Arranging Infant and Child Funerals, which was launched in the spring. Crescent Funeral Services are the first Funeral Director in the country to study and pass this pioneering course.

IFD College Trainer and Assessor Gemma O’Driscoll, from G.E. O'Driscoll & Daughters in Llanelli, was the first to put the training into practice with Crescent Funeral Services in Taunton, Somerset. She believes that the course is “absolutely critical” when funeral directors are dealing with a family that has lost an infant or child.

She said: “Chris Parker from the IFD College has done a great job to put together the course and gain a Level 3 accreditation for it, which is equivalent to an A level.

“I was involved in producing the training materials for the course so it was very satisfying to run the first session with Simon and Robert Helliar-Moore and their apprentice James at Crescent Funeral Services.”

The new course includes the correct terminology for the period of gestation or age of a foetus or infant, statutory requirements, local crematorium and cemetery procedures and processes, and how to support bereaved parents, other family members and siblings. It also includes how to support the mental health of staff during and after child funerals.

Gemma added: “Funeral directors do not deal with child funerals on a day-to-day basis so it is important that their knowledge is up to date and factually correct as the paperwork is different and there can be many practical differences between the funeral of an infant and an adult.

“While this course covers a lot of the practical legal aspects, it also looks at how you can make the funeral of a young child very special and appropriate to that family.

“For example, you could also be dealing with schools. I dealt with the funeral of a young person recently where there was heavy involvement from school pupils and teachers, so we were liaising with a lot more people that we would typically do with an adult funeral. It’s all about creating a really meaningful goodbye for that family.”

Robert Helliar-Moore explained why he was interested in the course: “The death of a baby or young child is always devastating for a family and it’s a very sensitive time where we need to provide the utmost care. We saw this course as a natural extension of the service we can provide families.”

Gemma conducted the day’s training at the team’s office in Taunton in March, then Robert, Simon and James had a couple of months to complete the coursework in their own time before sending in a portfolio of work to be assessed. 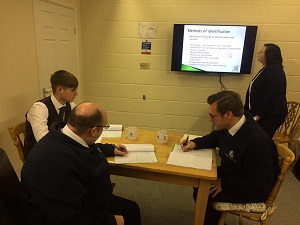 'Simon, Robert and James studying for the course, with Gemma O'Driscoll, the course tutor, from the Independent Funeral Director College.'

Robert said: “The coursework is extremely practical and you can put it into action straight away. It really extended our knowledge of the services that are available locally, such as  the improved services now being provided by our local crematorium.

“In addition to understanding the recent changes in legislation around child funerals and the paperwork needs to be completed, the course also opened our eyes to all the additional things we can do to individualise a celebration of a young person’s life – even simple things like changing the seating arrangements, so that the family can be nearer the coffin during the service to make more intimate for them.”

The course also looks at the resources that are available to support the families with their bereavement and the Crescent team found this exercise very rewarding.

Robert explained: “The death of a child sees the emotion on a family manifest in many different ways and is multi-layered. Being able to direct them to sources of support in the community, such as SAIF Care and local baby loss and child bereavement charities is so important and invaluable.

“Following the course, we made contact with a number of these local charities, including Aching Arms and Little Daffodils, so they were aware that we had recently completed this course. I was so touched by the gratitude that they showed us for reaching out to them and they were so pleased that were taking the time to ensure that our team were appropriately qualified.

“This course has reaffirmed a confidence to deliver services for families who have lost a child. It has allowed us to offer a more enhanced and personalised service, provide the most appropriate and up to date information and support for families.”

Written by and with thanks to Tim Power, on behalf of SAIF Insight Magazine - July 2019